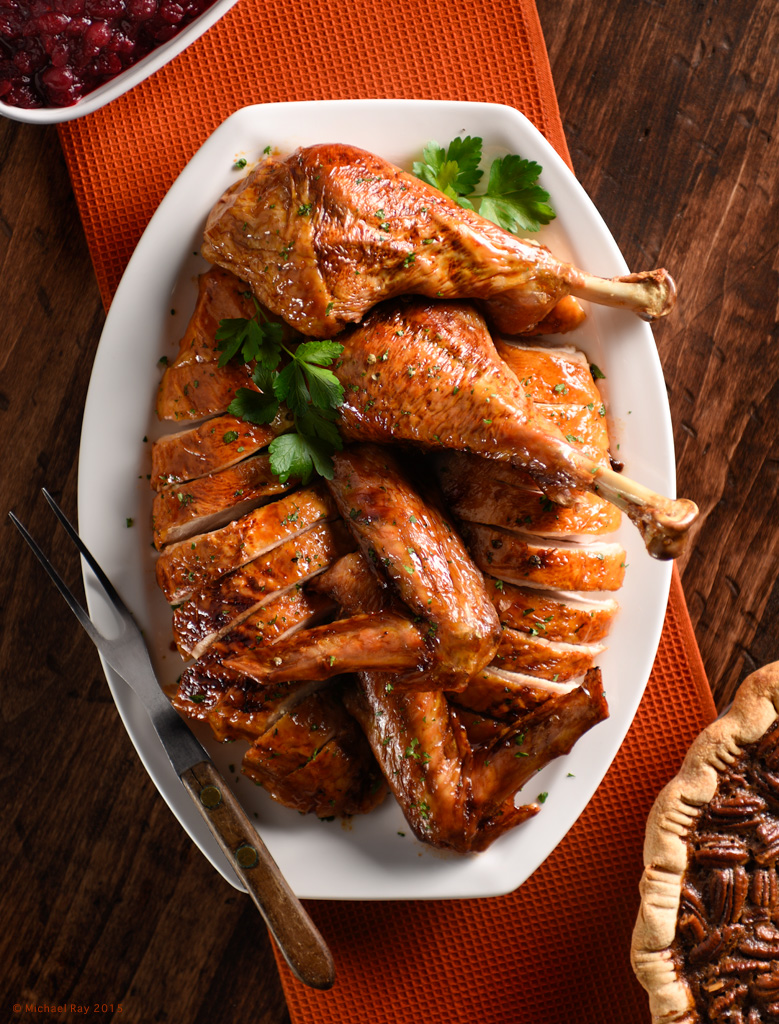 How Much Does Food Photography Cost?

Over the years, I’ve must of had over a hundred calls asking me how much I charge for my food photography. Each time I have to explain that it’s pretty much impossible to quote a price over the phone without a relatively extensive interview process.  To create an accurate estimate, it’s important for me to understand exactly what the client is expecting.  I understand that the person on the phone is usually just “feeling me out” to get an “idea” of costs, but the price can vary so much, I still need to know “about” what they are looking for.  So let me explain to you some of the variables that can effect the cost of food photography.

Like any other profession, a food photographer basically charges for his time.   Some photographers charge for “usage” too, but we’ll talk about that later.  The more time a photographer spends on a project, the more he needs to charge.

The “Day Rate” is a typical way that food photographers charge for their time.  Some shooters will have a “Half-Day Rate”, but I don’t because I’ve never had a food shoot take only a half day.  It just doesn’t happen.  So the big question is how much can a food photographer get done in a typical shoot day?  Well that depends on the following issues… 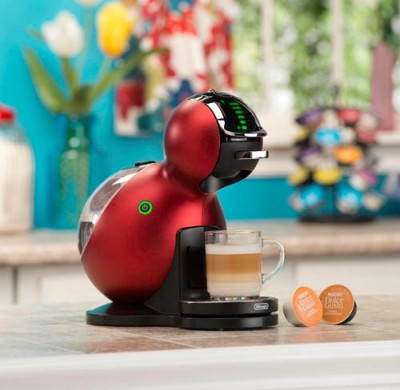 It looks like a pretty simple shot until you think abut the props and set we had to build.

I have done twenty food photos in a day and then there have been days that I have only been able to do one shot.  The complexity of the shots usually determine how many shots we can get done in a day. I’ll list just three of the variables that affect the complexity of a food photograph, but there are other too.
The number of food items in a shot

Shooting multiple food items in one shot is a lot more time consuming that shooting a single item of food.  When you’re shooting many different foods, composition becomes more complicated and will take time to work out.

Lighting is another issue that becomes more complicated with multiple items in one photo.  I use mirrors and multiple lights in order to create the mood and texture that make food appetizing. The more food, the longer the lighting will take to perfect. 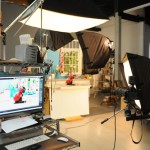 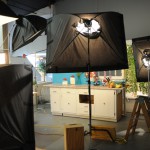 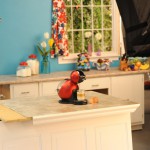 If you’re really new to food photography, you may or may not realize that the photographer does not prepare the food.  That’s usually the job of a food stylist, or in some cases, a chef.  Either way, preparing the food takes time and different foods take different amounts of time.  For example, it take less time to prepare a salad than it does to cook a turkey.  Cooking and preparation times of various foods will influence how many shots can be done in a day and has to be taken into account.

I have found that there are basically two different types of photos that most clients need from a food photographer.   One type of shot is called an “outlined” shot.  An outlined shot is when something is photographed with the intention of being “cut out” and placed on some other background.  I usually like to shoot this kinds of photos on a grey formica background.  This type of photo is usually relatively quick to shoot because of it’s simplicity.

The other type of shot is what I call an “environmental” shot.  Food photographers can either shoot on location to use an existing environment or shoot in the studio and create their own environment.

Going on location is an option, but packing up and moving takes time.  The farther away the location is, the more time it takes and will sometimes require travel expenses such as airfare, lodging, and hotel.  Travel expenses are usually billed at 1/2 rate.

Creating environments in the studio is what I normally prefer to do.  I have lots of props and backgrounds to choose from, so coming up with just the right “look”, is usually not a problem.  Creating an environment is more time consuming that just shooting on a grey background.  Composing the photo so it’s “beautiful” takes time, sometimes lots of time.  The more complex the environment, the longer the shot will take and like I said earlier, time is money.

Of course, to create an estimate, the food photographer will need to know how many shots will be needed.  That sounds obvious, but I can’t tell you how many time someone has called and not known the answer to that question…  Since I charge “by the day” there may be times when there is no additional price for shooting “one more shot”, because it ends up filling out the day. 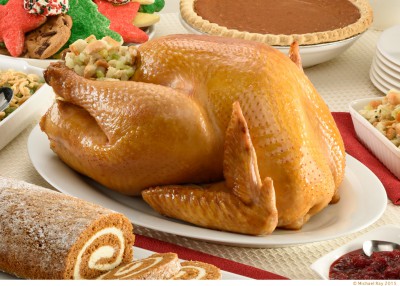 Someone has to cook the turkey and bake the pies. It all takes time…

Some tasks can be done before the actual shoot date, but still need to be figured into the price of the shoot.   Assistants or stylist can shorten a shoot day but will still need to be paid for their work.

Prop and food Shopping – If a particular prop are background is important to the shot, then it must be acquired before the shoot, but still needs to be taken into account when coming up with the price of a food shoot.

Food Costs – Some clients supply their own food for a shoot but some don’t.  The actual cost of food for a food photograph can run into hundreds of dollars, so it’s important to take that into account.

Building Sets – I have had shoots where I needed to build a set the day before the shoot, so there were additional expenses besides the one day that we actually shot photos.

Returns – In order to save some money, it may be a good idea to rent specific props or backgrounds.  If we do this, it will require that we return the items and someone will need to be paid for that service.

Retouching – Depending on the type of photo, there my be the need for retouching.  Some retouching is easy for the photographer to do between shots, but there are occasions when more extensive retouching is required and news to be done by a professional retoucher.  This doesn’t happen often, but can add expense to the shoot. 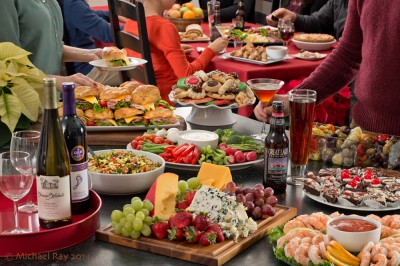 The number of food items in one shot can greatly affect the number of shots we can do in a single day.

Do We Need a Food Stylist?

This is probably the biggest variable when trying to determine the price of a food photography shoot.  Stylist are expensive and usually work every penny.  A stylist isn’t always needed, but probably 95% of the shoots I do, are with a stylist’s help.  If you’re from a restaurant and have a chef that can fit the bill then that will save a lot of money, but usually chefs are more about making the food “taste” good and don’t know all the little tricks that make the food “look” good.

This is a term from the film industry and it refers to the meals and snacks available at the shoot.  It doesn’t sound like it would add up to much money, but I’ve had multi day shoots where the croft services expense has exceeded 500.00.  That’s nothing to sneeze at.

Props and background materials are usually charged for in addition to the usual day rate.  Some of these items include dishes, table surfaces, walls, flatware, napkins, salt and paper shakers, cutting boards, and anything else that might show up in a shot.

Some photographers charge for “studio rental” for studio shots.  I do not.

Some photographers want to charge an additional fee, besides the time it takes them to shoot your job.  The fee is called “usage” and is based on how you intend to use the photos and for how long.  This type of charging is especially popular with “big city” photographers that live in markets that will put up with these fees.  And example might be and extra couple of thousand dollars for “billboard usage for one year”.  I give my clients “unlimited usage”.

Regional Differences in The Cost of Food Photography

I work out of Pittsburgh, PA and don’t charge as much as food photographer from NY or Chicago.  My expenses are less and can pass along the savings to my customers, but if you want to hire someone from a larger city, you can figure that the price those food photographers are going to charge you will be much higher than the ones from a city the size of Pittsburgh.

So you can see, a food photographer needs to know a lot of details before he can give you any kind of price.  If you ask for a “day rate” and try to base your budget on that number, you’re going to be far from the final cost.  Even comparing day rates can be misleading.  Some photographers manipulate or markup expenses to makeup for a lower day rate.  Probably the best way to get an accurate cost of food photography is to put a lot of thought into what you really need and then have a nice long discussion with a food photographer’s work you really admire.  It the numbers end up being too high, try another photographer and compare.  Any way it goes, you’ll need to spend some time.

I know this doesn’t really answer the question “what does food photography cost”, but it will at least give you an idea as to what all goes into coming up with the price.  Knowing this, you will be better prepared when you look for an estimate.  If you like my food photography and would like to discuss a project, I’d love to talk with you.  You can call me at 412-232-4444,  email me, and you can see more of my work on my food photography webpage.