I swear I must see a million food photos a day. I see them on Pinterest, on Facebook, and on Tumblr and I see the same lighting mistakes over and over again. When you’re shooting food photography, there are hundred little decisions that go into making a successful image. Most of those decisions are just too complex to list here, but I want to talk about the two lighting mistakes I see most new-be food photographers make that, if corrected, can improve their photography 500% overnight.

So lets talk about both of these mistakes and see if I can explain why that are wrong and what we can do to improve everyone’s food photography lighting.

Lighting from the front

One of the most important jobs of any photographer, let alone food photographer, is to translate a three-dimensional object (a dish of food) into a two-dimensional image on a screen or on a print. The best way to do this is to light the subject so as to give it the most shape and texture possible. Probably 95% of the great food photos you find will be lit from either 10:00 or 2:00, (with the camera being at 6:00). The best lighting tends to come from behind the subject, but not so far behind that it creates a super-hot reflection on the subject. Actually, I’ve seen quite a few really nice photos lit from 12:00.

They tend to be a little “unusual”, but many times, “unusual” is a good thing in photography. But I have never seen a food photo that I like, lit from 6:00 (camera angle). It just doesn’t happen. Sure, I almost always add some fill light from 6:00, but it is NEVER the brightest light on the set. Light from 6:00 lessons any shape or texture made from the other lights on the set. The more light from 6:00, the less texture and the less shape you end up with in your photo. The less shape and texture, the more bland your photo. Yuck! 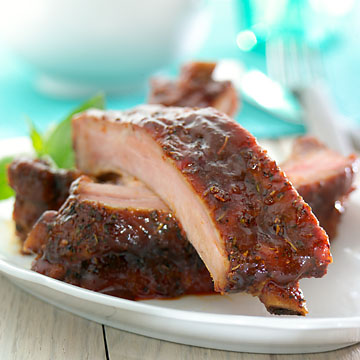 It’s a white plate on white boards, but are those white objects the brightest things in the shot? NO! It’s because I scrape the light… Can you make your white plates that dark?

Light from too high an angle

Have you even been outside on a bright sunny evening, just before the sun sets? Remember what it looks like with the setting sun raking across the landscape? It’s amazing! Why? It’s because the sun is SCRAPING across the landscape creating as much texture as possible. You’ve probably seen the same exact scene at mid day and didn’t think twice, right?.   At sunset, the light scrapes across the land and in food photography, the main light should scrape across the set. It’s the same idea, maximum shape and texture. That’s what you need to strive toward!

There is something a bit counter intuitive about keeping the main light low, as opposed to keeping it relatively high. One of the things people tend to object to when they begin their journey as a food photographer, is cast shadows. When lit, each object in a photo will cast a shadow, and the taller the object the longer the shadow. Most novice photographers hate these shadows and try to find a way of minimizing them as much as they can. One way they find to minimize these cast shadows is to place their main light as high as possible. It makes sense. If you don’t like shadows, make them as short as possible, right? (And add as much fill light as possible) The ironic thing professional food photographers know is that the longer the shadow, the less objectionable they become. (This is especially true if you’re NOT shooting “straight down” on the subject.) If the shadow ends in the crop of the photo, it tends to be more noticeable than if it were to extend out of the frame of the crop. Check out the examples if you don’t believe me. 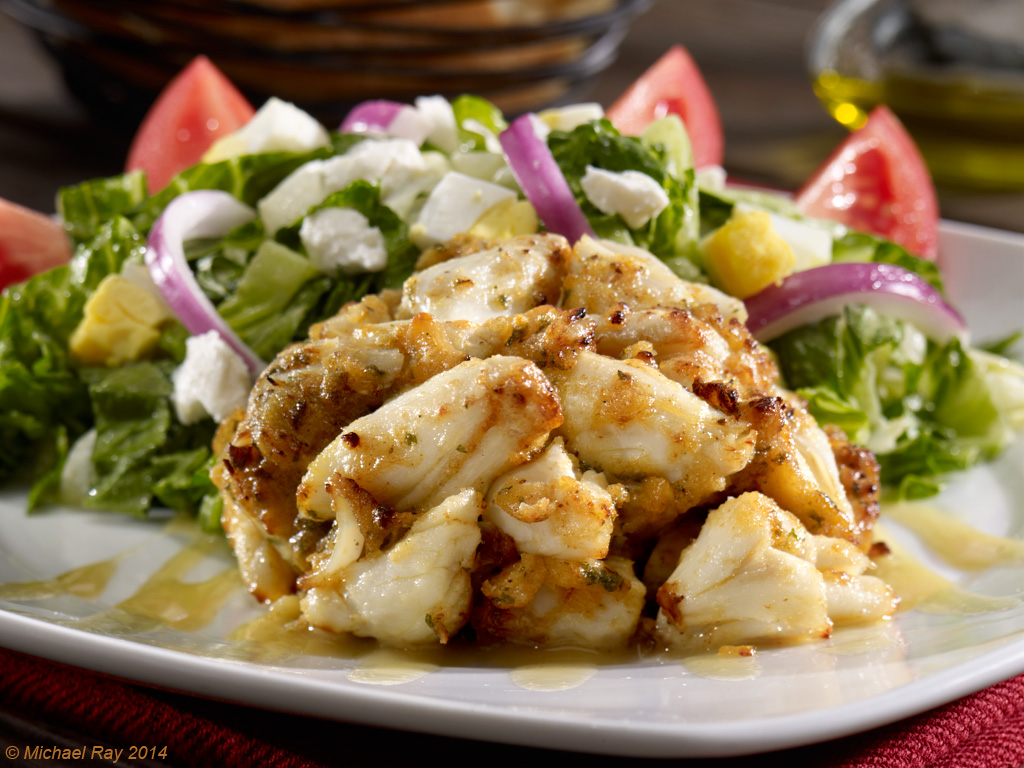 White plate… Is it the brightest thing in the shot? Are the shadows objectionable? No, they extend beyond the crop of the image.

Another thing that lighting from too high an angle does is to make every horizontal surface on the set, too hot or bright. For example… Since the viewer’s eye tends to go to the brightest thing in the frame, it’s usually a good idea not to make things too bright that you don’t want to be overly noticed. White plates and white tablecloths can be really distracting in a lot of photos. For psychological reasons, it’s sometimes important to use white dishes of tablecloths, and that’s fine. Maybe you want to communicate “fancy” or “formal” by using a white tablecloth, but when you do, you find that it competes or distracts from the food. What do you do? I scrape light across the set instead of blasting it with light from above. Try it next time! (See the sample)

So, you have an assignment. The next time you shoot food, try keeping the light as low as you can and keep it at either 10 or 2. That’s a good place to start! BTW… Everything I’m writing here is just my opinion. I think it’s usually good advice, but just remember that food photography is an art and I’m basically giving you rules to follow for starting out. And you know what they say about rules. Rules are meant to be broken. True artist break rules. But artists also master their craft BEFORE they break the rules. And if you’re reading this, you probably haven’t mastered your craft yet. Try doing what I recommended and see where it takes you. If it doesn’t work for you, at least you’ve tried something new… 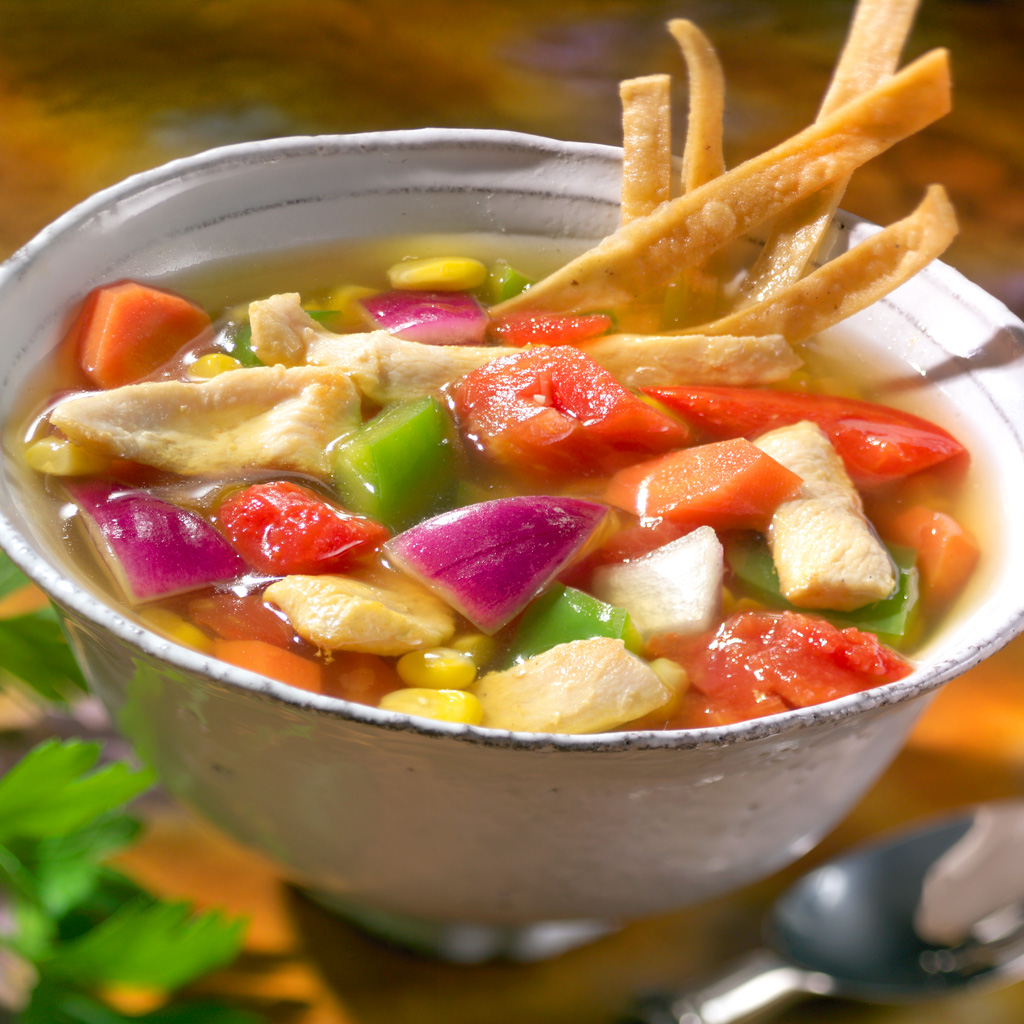 The cast shadow of this soup photo is very crisp and would be objectionable if it were shorter, but since it gets cropped out of the frame, it really isn’t an issue. But look at the texture that light creates when it’s scrapped across the set…